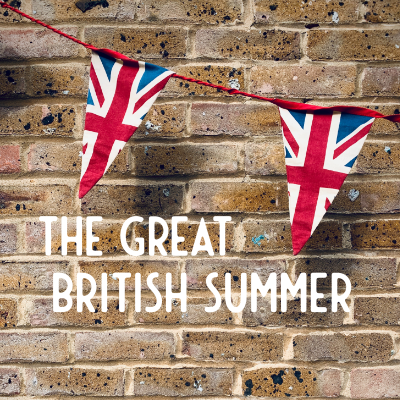 There’s no denying that summertime in Britain is particularly special and anyone living or visiting the United Kingdom is likely to experience it in a way that is unique to them. The weather may be full of sunshine and of course some showers, but what is summer in Britain really all about?

Dan: Hi, welcome to the British Culture Club, a Online magazine, podcast, and videos exploring British culture. If you're planning to live, work or study in the UK, if you're working with British companies we'll help explain some of the mysteries of British culture, the customs and the English language.

In this episode, Slavenka and I will be discussing the great British summer. We're going to be talking about weather, sports, activities, festivals, and food.

Just before we start, if you're learning English, reading the text of this podcast while you're listening to it is a really great way to improve your English.

So if you'd like to do that, go to the link to the British Culture Club home page in the show notes and go to our website in order to read the text while you're listening to it.

Now, Slavenka is one of the British Culture Club team. She runs a fantastic language school in Bath called Languages United.

Dan: First of all, let me introduce myself. I'm Dan. I was born in the UK. It was born in Surrey, just South of London, and I've always lived in the UK, so I'd been brought up in British culture.

Slavenka: Well, I am not originally from the UK and I studied British culture at university in Zagreb, in Croatia. But that doesn't really, you know, studying a language and culture does not really prepare you for the life in the country. It's the actual living in the country that prepares you best for that. I have lived in UK for 30 years now and I've discovered the British culture myself , so I'm going to give my own insights into this discussion.

Dan: Great. First of all, when we were talking about the great British summer, I thought, well, I'm going to look it up. So I looked in the Oxford English Dictionary and it defines Summer as the season between Spring and Autumn. And of course, that's a different time of year in the different hemispheres. In the Northern hemisphere, in the UK, summer is generally thought of between June and August.

The word itself is from old English, or Anglo Saxon as it's sometimes called, so it's originally of Germanic origin.

Rosanna who's one of the team wrote an article on the great British summer recently. If you'd like to read the article, by the way, it's on our website, again, link in the show notes. but in that article, there's a great quote. Which says:

"Summer is all about sunshine, showers, and strawberries."

Slavenka: Yes. I like that quote. Um, interesting that it mentions the weather and food. and, the British always seem to be, talking about the weather.

It's always a good topic of conversation. You know, it's a good starting point of a conversation when you say hello to someone.

Rosanna asked a few people about this and here she is speaking to Robbie.

Rosanna: Hello Robbie, thank you so much for joining us today.

You live in England in the south of England, you live and work here.

Can you tell us a little bit more about what makes the British summers so unique for you?

Robbie: Hi Rosie. Yes. I think because we've kind of in the UK, we are very famous for our, rainy weather and cloudy weather throughout, you know, winter and spring and autumn at times. and it can be quite unpredictable.

I feel like the British summer is so important because we finally get to go out of our houses. We can take full advantage of the lovely weather, enjoy the gardens and fields and events that are put on in the UK. And I also think it's so nice because everyone's in a really pleasant mood, you know, schools are shut, so kids are out and about playing football.

I think that, you know, we've got longer days so we can take advantage of everything and really finish work and then actually go outside and go for a run or meet up with friends. And it's six o'clock in the afternoon, so it's perfect.

Rosanna: How would you describe some of the feelings and emotions you have during the summertime here in Britain?

Robbie: I think it's a combination. Really. I think I'm as a person, a lot more positive it's I I'm affected by nice weather, sunny weather, and it's also like waking up and going to work you're still in a good mood and a happy mood because you know, you wake up it's day light rather than sort of dark.

Normally during winter it gets light much later on in the day and dark a lot earlier while in summertime, if you wake up five 30 in the morning and it's light. Yeah. You go to bed and it's 10:30, there's still a bit of light, so longer days mean you're a lot more positive. You can cram a lot more into your day and enjoy it more.

Dan: Interesting to hear what Robby was saying about people's mood changing in the summer.

Slavenka: British people make the most of the sunny weather. You know, the sun is out and everybody's wearing t-shirts and shorts and really everybody just enjoys the sort of good. good hot weather.

Dan: Yeah. As soon as the sun comes out, we like to make the most of it. And, the UK is one of the biggest markets for convertible cars as well.

You know, you wouldn't have thought that with the way the weather changes all the time.

Slavenka: I love convertible cars myself.

Dan: People love making the most of the sunshine. So if you're visiting the UK, it's not all sunshine in the summer, you need to be prepared for all weathers. And I think the British people are used to all weathers, and there's a lot of resilience to the weather.

I love going walking and there's a great writer of British walking guides called Alfred Wainwright. And he said:

"There's no such thing as bad weather, only unsuitable clothing."

Back in Rosanna's article, she talks about some of the summer sports: tennis at Wimbledon, cricket, playing croquet. So what do you like to do in the summer?

Slavenka: There's so much going on in the summer in the UK. And, I love the fact that there are so many festivals activities. For example, there's the Proms, which is the eight-week summer season of classical music, organized by the BBC since 1927, there's festivals like Glastonbury, the Isle of Wight.

Dan: Yeah, Eisteddfod in Wales, which is the annual cultural festival with music arts, dance performances, mainly in Welsh.

Slavenka: Yeah. Edinburgh. Edinburgh Festival in Scotland. There's so much going on. The sort of multicultural nature of the UK and appreciation of different cultures is very much present in the summer.

Dan: Yes, you've got Notting Hill Carnival in London, celebrating Caribbean culture. It's more than a million people go there over that weekend

Slavenka: Yeah, there's even another nearer to Bath as the St Paul's carnival in Bristol, as well as WOMAD.

WOMAD, World Of Music, Art and Dance. Which is just around the corner from Bath, which is really one of my favorites, because you could experience so many different cultures, music from all over the world. And I really like love it. You name it, you can have Latin American musicians, African musicians and musicians from local ethnic communities as well. But it's wonderful to, to hear that.

But apart from the music and, art and dance, there is also food, fantastic food that you could taste at the festivals from really all over the world. Do you enjoy food at the festivals?

Dan: I love the opportunity to try all the different foods there.

Slavenka: Well summer is all about eating outside. whether it's a restaurant, pub garden, picnic. I love having picnics during the summer in England.

My favorite place for picnics is the Royal Crescent in Bath.

Dan: Ooh, very nice. So what do you like to eat on your picnics?

Slavenka: In our family we love sandwiches. We'd take lots of different sandwiches.

I suppose one of the favorite fillings i s cucumber we really liked them, very refreshing in the summer. But apart from sandwiches, we also take scotch eggs, sausage rolls, pork pies. Hmm.

Dan: What about dessert?

Slavenka: For dessert, it's Victoria Sponge and Strawberries and Cream

Dan: It's a great time, actually, when you can go out and pick your own fruit.

So make sure you don't miss it. If you're a new listener, please click on the subscribe button. Go to the British Culture Club homepage, you can join the club to get updates so you don't miss our blog articles and other news. Look forward to you joining us next episode. Slavenka, thank you very much for being here on this episode.

Slavenka: Thank you for inviting me.

Dan: See you then.

Their lessons improve your English skills, and your understanding of British culture.

If you need to improve your English for UK visa application, Languages United provides preparation courses for the UKVI approved English exams.

Follow the link to the British Culture Club homepage, in the show notes below, to find out more.